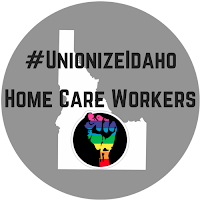 Hey it's our first post! How awesome is that?! So I thought I would kick things off with a question. Why Join A Union? Well it's a fairly simple answer really. One that over that last hundred plus year of organized labor has been able to answer again and again with both action and examples backing up those actions.

Let me just start off by telling a bit of history, and telling you a bit about why and where #UnionizeIdaho came from, and why we exist.

Before we dive into why we should unionize, I would like to take a few moments to tell you who I am and why I am so passionate about this cause.


My name is David Shorb, I just turned 40 year old in July, and I'm married to my wonderful wife Kristi just over a year. I've been an In Home Care provider on and off since 2002. My very first client was a World War II vet who was a paraplegic. I got one day of training to learn how to transfer him from his bed to his powered wheelchair. I work for that client for a year and I did it 12 hours a day 7 days a week. There was no time off, there was no sick leave, there was no living wage, because I got paid by the day instead of by the hour. I quit after I just couldn't take it anymore. I was burnt out, and exhausted. Because he was what was considered a care intensive client.

You would have to make all his meals, cut them up and then feed it to him. You and to help him with his bowel program, and of course empty his catheter bag several times a day. We also had to help him with his medication and for myself as I did his overnight shift. Turn him every two hours or so, that way he wouldn't get bed sores.

For the last 5 years I'd been taking care of my mother full time as she had been in poor health. However it wasn't any of her health issues that caused her to pass away in March of of this year (2017). It was an aneurysm that burst. I was her designated person for her Living Will, and DNR. So I had to make choices that were in her best interest. So being a care provider can mean more than just washing the dishes or vacuuming the living room. Sometimes it means making choices that are literally the difference between life and death.

Now why should Idaho In Home Care Providers unionize? Because this is a field that is highly skilled, and it's going to be in higher demand as the aging generation of baby boomers need more and more help around their homes. We also take care of those who are disabled either by accident, or by birth. We fill that void between when family can be there for their loved one, and when they aren't able to because of work, or school, or just so they can have a moment to breath.

We put our bodies on the line everytime we go into a clients house because we don't know what kind of day we are going to have with that client. Most of the time it can be pretty routine. However there are also those times when you have to clean your client up because of an issue with incontinence, or you have to take your client to a doctor's appointment or you walk in and your client is already in distress so you have to act immediately.

Most, but not all, In Home Care Providers are CPR certified, and in some cases they are even certified for medication assistance. It's my opinion that all Providers should have CPR and medication assistance certification. We help people move from bed to their chairs or their chairs to their walkers, or even help them get around their house so they can do what they can so they can feel more independent.

However Idaho doesn't think that In Home Care Providers should get a living wage. The rough average weekly wage for a In Home Care Provider in Idaho is about $440.20. The average cost of the average family per week is $329.76 and that is before you add in the weekly transportation which is $75.13 for gas and insurance. Which if you're an In home care provider you have to have a car to run errand for your client like shopping and going to medical appointments. Also in that $329.76 that doesn't cover food cost which for a family of 4 can be around $126.96 per week. So just covering basics per week will cost about $531.85 and that still doesn't include things for entertainment like going to the movies or going on family vacations. Based on the average costs someone who is an in home care provider is running a deficit of -$91.65 every week. Also those number are only the average and they still don't include costs like mobile phone service which an in home care provider will have to have because as of the EVV mandate part of the 21st Century Cures Act that was passed back in 2016.

The Average cell phone bill can run anywhere between $70 to $200 a month depending on family size and the type of service they have, and as most people can't afford to pay for a phone outright most people are making installment payments on their phone bills which also contributes to the overall cost.

If an In Home Care Provider is making $15 per hour they would be bringing home a gross annual wage of $28,800 that comes out to before taxes and other deductions a monthly wage of $2400. So you can see why it's so important to make sure that in home care providers have a living wage. It's why we need to unionize and why we need to stand up and say that what we do has value and we deserve to get paid more than what the average worker gets paid right now which is about $10.00 for most agencies, however there are some that pay a lot less. There are a lot of agencies that don't offer any benefits. So a home care worker is left debating if it's worth losing a day of wages because they might be sick, or if they can afford to take off the time to take care of a family member. Or If they can afford to take the time off for attending a family event, or even take a vacation. Most workers are stuck working 52 weeks a year never taking any time off, and if something catastrophic does happen they they are stuck with thousands of dollars in hospital bills that they more than likely won't be able to pay off because they now don't have a job. Because the home care agencies treat most of their providers as if they are disposable.

Why Unionize? Because it's the path that will get home care workers what they need to make it month to month. To get the job security they need, and to get the health care coverage that will keep them out of debt. When we unionize we will get paid sick leave which will help protect our clients, and we will get paid time off so we can spend that time with family or even just taking a mental health day. Right now most Providers aren't able to do that kind of self care because agencies are more concerned with their profit margins then they are about the well being of the providers they employ. When we unionize we give ourselves a voice to say that we want to be heard and we want to be shown the respect we have earned being in home care provider.
at November 26, 2017