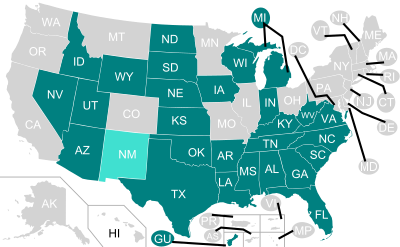 In 1987 Idaho's Right To Work law went into effect. In the years since, the amount of damage it has caused Idaho workers has been castistropic. Right To Work laws have one goal and one goal only. Which is to impact and damage unions, and give big business more power over their workers. Which currently means that employers in the state of idaho are not required to give meal or other kinds of  breaks. Idaho aligns with the federal minimum wage of $7.25, and frankly the state of idaho is fairly weak on protections for workers.

According to the 2002 Federal Reserve Bank of St. Louis report (PDF) written by Emin M. Dinlersoz and Rubén Hernández-Murillo, "....the most obvious reason is that the passage of the law makes unions less attractive to workers because unions no longer have the ability to enforce payments and fines. These effects depress new union organizing and also deter the replacement of decertified unions. If a state’s labor force is growing, then less union organizing means also a reduction in the union membership rate."


Between 1987 and 2000 there was a 2.8% drop overall in unionization state wide. I've written about the overall effect of Right To Work laws on workers. My Medium article, "Right To Work Is Really Red States Just Union Busting" I talk about why Right To Work laws are so harmful I stated that, "The Bureau of Labor Statistics estimates 31,000 Idahoans made $7.25 an hour or less in 2012. That’s a 63 percent increase from 2011. This still doesn’t change the fact that, because of greed of the home care agencies, and because of “Right To Work” laws that allow them to underpay HCAs. Home Care Aides are still paid 21% below the national average, and HCAs make up over 50% of the home care workforce in the state of Idaho."

The fact that Home Care Aides are paid so little when they provide such a vital service. The Idaho Right To Work law prevents them from unionizing because they would be unable to raise the money needed to maintain the union because not only because of the Right To Work law, but also because of the recent Janus ruling. That SCOTUS ruling, dealt a pretty hard blow to union fundraising. I think that fair share fees should be legal because for a union shop, the Union is working for everyone. I don't think everyone should be made to join the union. However, I think if you work in a union shop you should be paying your fair share to support the work the union is doing to help raise wages, and provide for a safer working environment. I think there could be a way to isolate fair share money from union dues. So that fair share money doesn't get used for political campaigns.

The reason why employment went up when the Right To Work is because employers could now pay less than a living wage, they don't have to offer medical insurance, they don't have to offer paid time off, or paid holidays, or even paid sick time. Big businesses can now maximize their profit that the expense of their workers. Although the ACA has helped, most Home Care Agencies that offer healthcare coverage, tend not to cover any of that expense which means that workers will have to come up with more than $400 a month for their coverage.

Because of Right To Work laws, Home Care Agencies aren't offering paid time off, or even paid sick time. Which means that HCAs are having to work when they are sick. So you have work or you lose money that you need to pay your bills. So if you have the flu, or get TB, or come down with a cold, you have to work through it, even though the right thing would be to stay up until you're not sick.

Not having paid time off, increases the likelihood of burnout among HCAs. Which is higher than other care professions. Because a large majority of Home Care Agencies don't offer paid time off, there is a massive amount of burnout for Home Care Aides. Many of them can go years without any significant time off. Right To Work laws have allowed this to happen in Idaho. It's harmful to HCAs because without that time off, they never get a chance to decompress and refuel their emotional tanks.

Right To Work has harmed not only Home Care Aides, but it has harmed workers in Idaho as a whole. It creates an environment that allows employers to abuse their workers. To force them to work more that the average forty hours a week just to make ends meet. No one should have to work to the point of exhaustion because their employer wants to maximize their profits. Right To Work laws allow employers to do just that.
at January 20, 2019